Remembrance Day By: Raveena Duggal We will never forget the war, The condition our Country was in, The millions of people that died, The many sacrifices that were made, The World was in a terrible state, Families and children were horrified, Cities and towns were burning, People died or were kidnapped, The Canadian soldiers defended 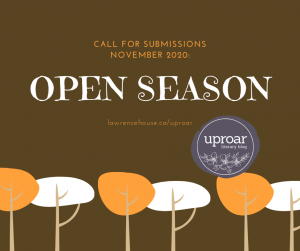 Uproar is now accepting submissions for November 2020. This month, participants are welcome to submit work of any genre or theme. We look forward to reading your work! You may submit your writing here: https://lawrencehouse.ca/uproar/theme/